Physics: There was supposed to be a test today. I pushed it off until Friday because over half the class would need to schedule make-ups anyway, and the other half was wound up tight over all the information and almost collapsed with relief that they would have an extra two days. So, today was in-class study and chances to ask questions.

Honors Physics: Resonance for Realsies. I showed them the video of the Tacoma Narrows Bridge, played with tuning forks, blew their minds with resonance boxes, played the pan pipe a bit, showed them pictures of parallel flex towers like the ones used in my college clinic project, discussed differences between acoustic and electric guitars, passed around the head scratchers, reviewed a few ideas we’d discussed before, and talked about how structures these days are damped to avoid tearing apart in the wind or being shaken to death in earthquakes. Overall, one of my most favoritest classes, because we all just get to play with toys and watch videos and share stories. So good. 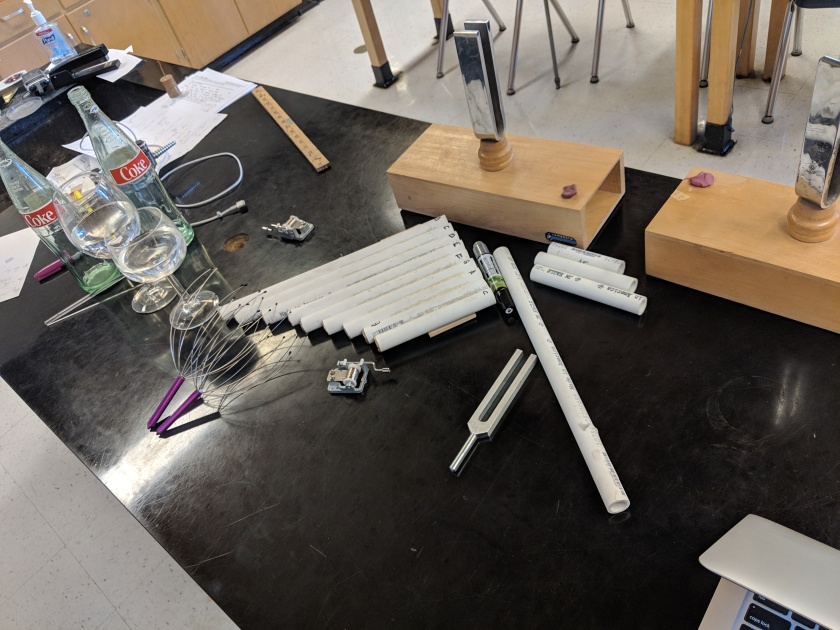 AP Physics: Continued talking about the field for gravity. We then transitioned from fields and forces (which they seem almost sick of talking about because ugh it’s so obvious can we move on now. Excellent) to reviewing work and energy before deriving gravitational potential energy. We had a long discussion about where the negative came from and why it makes sense physically, and then I had to talk them all down from winding themselves up in the algebra. Know there’s a negative, know why it’s there, and then proceed to ignore it completely when actually solving problems. We know the magnitudes of change are the same for U and K. So find the magnitude, and then figure out the signs based on whether the object is moving toward or away from the Earth. Getting caught up in the algebraic weeds instead of understanding the concepts and applying reason is a sure fire way to ruin yourself when it comes to problem solving. Physicists are lazy. Understand why things are the way they are, and then use the methods that make your life as easy as possible within that set of circumstances.