Physics: Quiz on black holes and universal gravity. The other classes are watching a video, but I still didn’t want to do that with these kids. I know I would find it fascinating, but I have a strong feeling they aren’t interested in space documentaries, and the accompanying questions are not things that I care about them knowing at this juncture nor are they things that super duper apply to upcoming topics, so we’ll talk about those ideas as we come to them. We talked about black holes, I showed Dan Burns’ “Gravity Visualized” video and talked about the different aspects of it, and generally let their questions guide everything we talked about. They asked some good questions and showed a lot of curiosity, which was awesome, but not enough to convince me that they would want to watch a documentary that barely touches on their questions or even the topic of their questions.

Honors Physics: Today we started on our path to discovery of how we know the composition of the universe. After a review of the parts of an atom and how they work and what job they do, the Bohr model, and emission spectra, I handed out some diffraction gratings and we looked at a bunch of cool glowing stuff. We don’t have a dedicated emission spectrum machine, but we have glass tubes of gases and a Tesla coil, so I made that work. They also had a big box of other cool stuff like the thing below that held glowing coral, a cathode ray tube (which got me SO EXCITED to actually see the magnet moving the ray, although I did shock myself a few times from both excitement and not enough experience juggling Tesla coils and enormous magnets), and a few things that didn’t work and were very anti-climactic. But then we played with the coral some more, so everyone left happy. 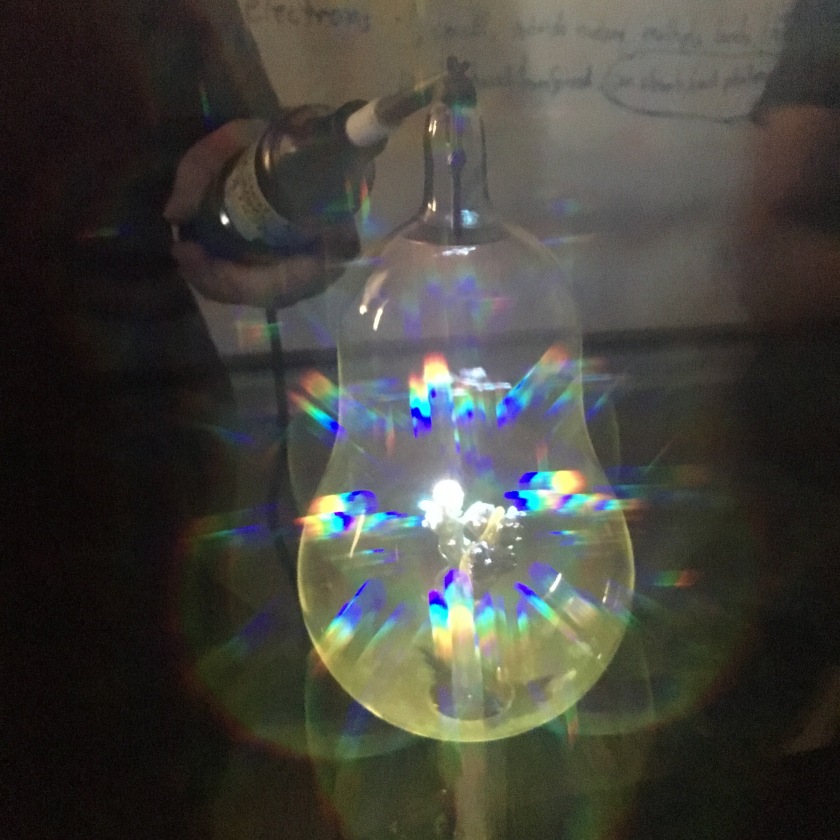 Once we finished with the spectra, we talked more about stars and their life cycles. One student asked me why all stars didn’t die as big lumps of iron. That’s a fair question. So, then I started acting out the life cycle of a star. It began with me striking a pose and claiming, “I’m a star!” The students started giggling nervously. So then I was a nebula who was coalescing, and as gravity pulled things in they started getting warmer. Struck another pose: “I’m a HOT star!”

And that reached their limit of absurdity, so class descended into temporary chaos. It’s all good. I like it when I get them to laugh at me. I know they’re listening. Someone in this class also asked me why red giants get big instead of getting smaller, so I am continuing to research that so I can explain it correctly.

AP Physics: This was day 2 of final exam post-game where students went through their finals together and also got the scoring guidelines and their point break-down so they could see how the grading correlated with their performance.