Tomorrow is our school Symposium where we have a full day conference on a specific topic, and this year the topic is Brain Science. So that’s tomorrow, then I’m gone Thurs/Fri for the Sacramento Regional FIRST competition, so I won’t post again about what I do in class until Monday.

Physics: Beginning of electrostatics! I did a lot of rubbing a balloon on my head and tangling the heck out of my hair. It amused the kids, so I’m happy to do it. I still have tape stuck to my desk because I ran out of time to do that demo and, hey, now it’s already set up!

Honors Physics: I had them put all the data in one spreadsheet (yay google sheets!) and look for the patterns. They discovered the relationships of voltage and current in series and parallel for two resistors pretty quickly. They needed a little prompting and some reminders that real-life data is not as good as our idea model and thus not all measurements were going to be perfect, especially when most groups put the big resistor closer to the positive end of the battery and Next I had them look at equivalent resistances in series and parallel. Somehow these measurements were way harder than the current and voltage. That was utterly unexpected, but we got it sorted out eventually. Then, I had them take their data, calculate power, and once more look for patterns. We came to the exact same conclusions as the AP class did earlier this year. Imagine that! 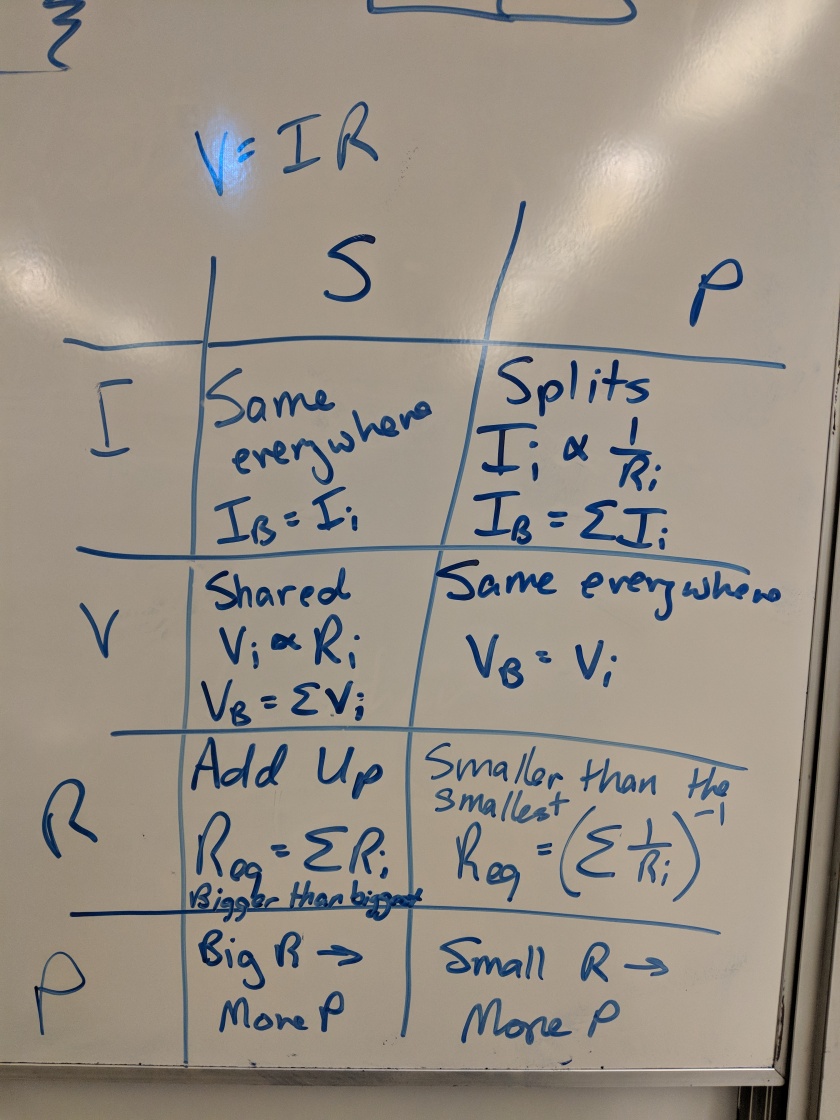 Then we used these relationships to analyze a few circuits and ended with a practice problem for them, and the majority of the class was them doing, looking, measuring, talking, and answering my questions. There were only a few times I had to outright tell them things that were true instead of confirming their conclusions (like the equivalent resistance in parallel formula. I don’t expect them to discover that empirically). These are my favorite types of classes.

AP Physics: Oy. My predecessor is here since he’s subbing for me while I’m gone to the robotics competitions this week and next week. He’s an amazing person and teacher, and I’m so frazzled and out of it from all the robotics stuff that I feel like an absolute fool. He has been sweet as can be, but I super flubbed the first AP class today. I got more relaxed over the course of the day and re-worked the lecture before the second class, so that one went WAY better. We were continuing magnetism and did the right hand rules and that sort of thing and just botched all the things and explanations and somehow forgot all of physics and how things work. I remembered by the end of the day and was able to do a pretty good job the second lecture, which was nice, because the first class was my sweet class and the second class was my grumpy, judgy class. When that happens in the opposite direction it makes for a Bad Day.